New Netherland was established in 1614 as the first Dutch colony in North America, and spanned parts of what is now New York, New Jersey, Pennsylvania, Maryland, Connecticut, and Delaware. Five years earlier, Henry Hudson had sailed in the service of the Dutch East India Company into the mouth of the Hudson Bay, in search of the fabled Northwest Passage to the Orient. The rivers Hudson explored did not lead to westward waters, but he traded with the Native Americans for furs, and claimed the area for the Dutch Republic. In 1621, the States General of the Dutch Republic granted a monopoly on fur trade to the newly formed West India Company within the Dutch claim along the Hudson River. The first colonists arrived in 1624 in support of a small trading post at Fort Orange in present-day Albany on the upper Hudson River, or the Dutch-named Noord Rivier. Though most of the trade continued in this upriver area, a year later, a second stronghold, Fort Amsterdam, was established on the southern tip of Manhattan Island to receive incoming ships and protect the entrance to the river. New Amsterdam became the seat of New Netherland government.

In the fifty-five years that followed, the Dutch colony drew immigrants from all over Europe as it developed socially, and politically, and economically, offering a strategic point for trade. The colony was taken by the English in 1664, but not without leaving a lasting imprint. It roots had already been established through the language, diversity, culture, foods, place names, and business practices that are still evident in New York City today as a multi-cultural center of trade. The many New Netherland documents left behind on both sides of the Atlantic attest to the vibrant legacy of this early American Dutch settlement. 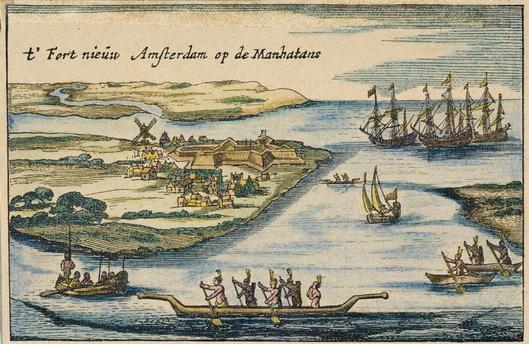